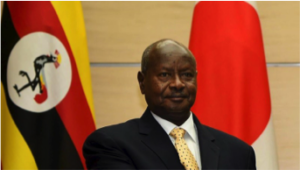 Yoweri Museveni, who has been Uganda’s president for 31 years.

Then, over a period of two decades, more than 20 militant groups emerged. All of these groups were motivated to put an end to President Museveni’s government and each one attempted to displace the government both within and beyond the Ugandan borders.

Between 1987 and 2007, the war against Joseph Kony’s Lord’s Resistance Army (LRA) by the government struck the north of Uganda while Southern Uganda experienced developmental progress. The LRA initially purported to fight the Ugandan government as a direct response to President Yoweri Museveni’s NRM and its efforts to consolidate control over the northern part of the country, but then turned against the civilians. This period of conflict and violence has seriously devastated the population in the northern region and continues at the present. As a result, in 2015, Uganda ranked number 23 among the world’s most fragile states (Fragile State Index 2015, Fund for Peace). 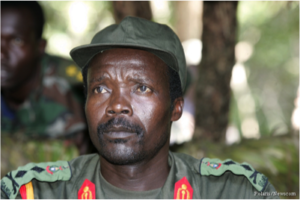 Joseph Kony, leader of the Lord’s Resistance Army, a notoriously brutal rebel group that withdrew its forces in 2005 from Northern Uganda.

Indeed, when the Lord’s Resistance Army (LRA) and, in particular, the leader Joseph Kony began to commit human rights abuses towards the people, Ugandans started suffering from acts of extreme brutality. Over time children were abducted to lead the war of the LRA. A few other youngsters joined the movement as a way to tackle poverty and to survive. Villages were attacked, thousands of children and adults were killed, mutilated and displaced, young girls and women were abducted and forced to become sex slaves for rebel commanders and often fell pregnant as a consequence of this coercion. Ugandans also suffered severe abuses committed by the Ugandan People’s Defence Forces (UPDF), the national army tasked with protecting them. 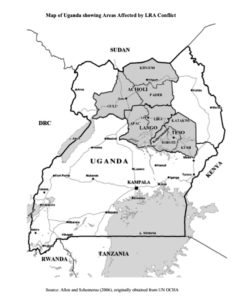 As a result of this war, economic and social development has been affected. Millions of Ugandans lived in a period of danger, destruction, erosion of civil liberties and lack of truth. More so, one particular issue has emerged. Since the period of conflict, former child soldiers and victims of war have been suffering from mental illnesses due to what they witnessed or were forced to do on the battlefield, such as kill members of their families or fellow children who attempted to escape. And they are not the only ones to face this mental illness, because when one person is experiencing post-traumatic stress, it affects the whole family and the whole community. Consequently, the population in Uganda is a population with unprecedented rates of domestic violence, alcoholism, sexual and gender-based violence (SGBV), youth unemployment and crime.

After the withdrawal of the LRA from Northern Uganda in 2005 and the signing in 2006 of a Cessation of Hostilities Agreement with the Ugandan government, the country has been on a slow path to recovery and Northern Uganda is beginning to heal. People from displacement camps have returned home and life expectancy, which fell below 44 years for both sexes in the early 1990s, has increased to 59 years in 2015. Thus, as the country is no longer an immediate post-conflict state and as the LRA threat has decreased, strong policy implementation should be respected to promote further reconstruction and development, especially in the following areas:

– Giving socio-psychological support to former child soldiers and victims of the civil war;

– Ensuring national security as the LRA continues to perpetrate serious human rights violations where it is currently based in the Democratic Republic of Congo and the Central African Republic.

The integration of peacebuilding into the education sector

As a recovery strategy, Uganda has been launching policies to promote the integration of peacebuilding into the education sector since 2012. Thanks to this initiative and especially the new Ugandan schools curriculum, children are being taught about conflict and peace.

Ex-soldiers and their perception of themselves can also be changed through education. Indeed, as former child soldiers attend school, like the individuals who IamSCS is helping in Laroo ADRA School, they can hear positive messages, deal with past events, develop relationships and trust and stop feeling guilty for something they didn’t have control over in the past.

Experts and organisations ensure that if children have equal access to education, if public schools are well managed and used as a real tool to come to terms with past conflict and are not only used to prevent future conflict, we can then hope for the emergence and development of social cohesion.

What IamSCS is doing to spur sustainable peace and development

IamSCS is working on implementing special training for former child soldiers at Laroo ADRA School and for 30 women returnees. This training will give these beneficiaries much needed skills for various jobs and will allow them to make a living.

We need you to promote shared prosperity

By implementing projects to help the individuals and their communities in the spheres of education, training, health support and micro-finance, together we can improve the living conditions of Ugandans. Help us to ensure stability in Uganda by supporting our humanitarian effort!