Mental illness as an enormous disease burden in African societies

As we’ve already started to highlight in our Blog Series and as we’ll continue to describe the situation there, Uganda is characterised by poverty, inequality, a high prevalence of food insecurity, HIV/AIDS and other diseases and, especially, mental illness due to the Lord’s Resistance Army (LRA) movement which began in 1987.

Internationally, the World Health Organisation (WHO) estimates that mental disorders account for thirty per cent of all non-fatal diseases and ten per cent of the overall disease burden that includes death and disability.

Mental Health should be a Global Priority

Given this alarming situation, every country needs an action plan to tackle the scourge of mental illness. This is what the World Bank Group and the WHO, in 2016, encouraged countries all over the world to do, so that mental health gradually becomes a global health priority.

In Uganda, despite the existence of policies to fight mental illness, the government doesn’t prioritise them and allocates only one per cent of its health budget to these schemes. The primary health care staff is poor with only 1.13 human resources per 100,000 members of the population working in mental health facilities or in private practice in 2005. Consequently, the situation in Uganda is unsatisfactory.

But having mental health issues last on the list of priorities is not the only thing that slows down the healing process. The individual’s recovery depends highly on the social perception of the illness.

From the perspective of African countries, mental illness is a burden that should be treated differently than other chronic health issues such as HIV/AIDS, diabetes or cancer. Many people in various African countries – including Uganda – follow traditional belief systems and rely on supernatural remedies to deal with mental disorders.

Therefore, when people suffer from mental disorders, they also suffer from stigma, prejudice and fear due to their condition. As a result, they are often confined in remote areas, at home or in prison. 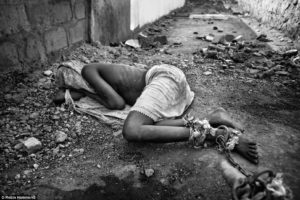 This woman is shackled to an engine part in Juba Central Prison, South Sudan. Like her, thousands of people suffering from mental illness are locked up in hospital wards or in jails in Africa. 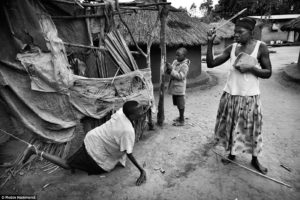 This 14-year-old boy has been tied up in up in Gulu, Uganda, for six years while his mother refuses to give him proper treatment.

By being rejected or excluded from certain groups or societies, ill people lose their social status. Such a high degree of social disadvantage hampers the sufferers’ attainment of a basic level of human dignity. For people who even believe that all individuals with mental illness are dangerous, the response is to tie them up and refuse to have contact with them.

The stigma of being seen as ‘mentally ill’ means that the individual continues to suffer years after armed conflict has ceased since they are restricted from access to care and support services. Hostile, violent and aggressive behaviour towards them are some of the challenges that they have to face. By extension, these unhelpful and inappropriate responses can further damage their health, make them adopt negative feelings about themselves and can prompt them to commit suicide.

For people with mental illness who are not detained, other barriers need to be overcome. One of the main challenges they have to deal with is the economic consequence of externalised stigma. Experiencing social isolation and thereby developing low self-esteem and poor social skills, young people find attending school difficult and adults find it similarly difficult to get jobs. These people struggle even more than others to make a living, to pay rent and health care bills and just to put food on the table. That’s why we need to reduce the stigma around mental illness. Reducing this discrimination will automatically reduce inequalities and thus improve the lives of those with mental disorders.

You’re a part of the solution to restore mental health

At IamSCS, we believe that if health and social support services are available for these individuals, the societal burden will disappear. By supporting IamSCS, you’re supporting our ambitious mission to give the correct treatment and tools to those afflicted by mental ill health.

WHO-AIMS, 2006, “A report of the assessment of the mental health system in Uganda using the World Health organisation – Assessment Instrument for Mental Health Systems.”