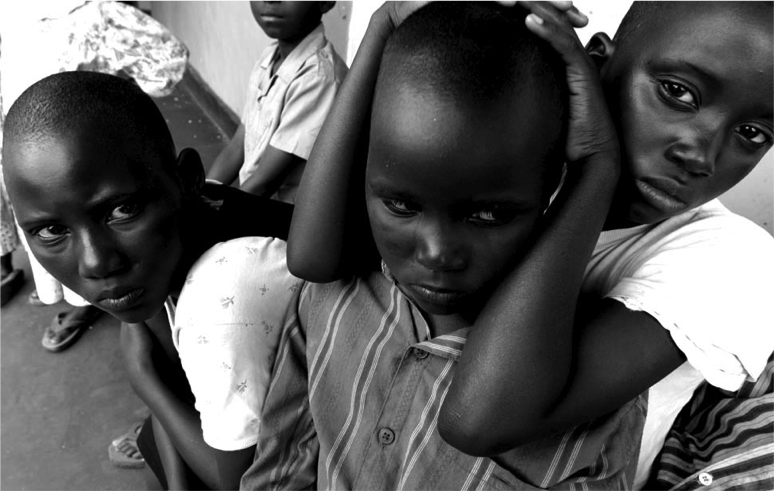 Girls and women, who collectively represented 30 per cent of the LRA forces, played different roles while involved in this armed conflict. They were fighters, spies, informants, and slave labour as they also carried out traditional gender roles such as cooking, cleaning and serving men. Furthermore, a number of them were forced to take drugs, were deprived of food and experienced sexual, physical and mental torture as they became sexual slaves and were violently mutilated, leaving them disfigured. Some of them died in the process of delivering their babies. By being exposed to war events such as bomb explosions, massacres, stabbings and raids of homes, some girls and women have ended up weaker than they were pre-war while others have developed strengths.

Valantine Mbolibirani was 13 when she was forced to be one of Kony’s many wives. Photo credit: Marcus Bleasdale

As a result of these abductions into the LRA and their participation in the conflict, girls and women were left with psycho-spiritual, physical and psychological health and sociocultural issues.

In particular, the return of girl mothers and young women with babies to their communities is very challenging as they feel ashamed, may not be welcomed back and are often treated as outcasts by the community. This rejection of social integration concerns essentially girls and women who gave birth to babies fathered by rebel-captor “husbands” during their captivity. 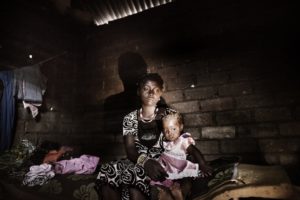 Marlene Soulange Yagasaurana gave birth to her child after being forced to become the wife of Chopin, an Lord’s Resistance Army commander. Photo credit: Marcus Bleasdale

In addition, the majority of girls and women returnees are suffering from sexually transmitted diseases (STDs) such as HIV/AIDS, syphilis, gonorrhoea, chlamydia and other health problems such as headaches, anxiety and pain from genital injury or infection because of the sexual abuse. The aftermath of killing or injuring others has left these girls and women with severe depression, anxiety and hostility symptoms. As they are usually not being tested or treated, some may die and leave their children orphaned.

Community-based approach: a powerful tool to reintegrate girls and women

To spur the reintegration of girls and women it is crucial to prioritise practical assistance to them and to monitor their return. The first step of these reintegration programmes is the demilitarisation of girls and women. Then, psychosocial programmes allow returning girls and women to heal from trauma by addressing the effects of war on their psychological and physical health. For instance, they can benefit from programmes that encourage them to express their feelings and stories through drama, music and arts, and those that provide skills training or education and assistance to pay not only for housing materials, food, clothes, medicines for themselves and their children, and the rent but also for specific programmes such as STDs health education and prevention programmes.

These programmes are developed within war-affected communities so that they help to bring together and create a bond among their participants while also identifying the girls and women in need. Furthermore, experts suggest that girls and women must play an active part in the reintegration programmes by planning, implementing and evaluating the projects for themselves. As a result of these economic and psychosocial support systems, they will certainly be more confident and carefree and will experience increased self-esteem and a positive perception of the future.

IamSCS contributes to the reintegration of girls and women

The campaigns of IAMSCS aim to give children an education and to equip women returnees with skills training and micro-loans to develop sustainable livelihoods. Help us to achieve successful reintegration and to fulfil our beneficiaries’ critical need for schooling and skills training. Thank you.